Home > For Your Information > Page 3

By General Synod Communications on September 15, 2014

For the first time the Anglican Church of Canada is releasing its annual report online. A brand new website has been launched to house all the 2013 highlights from General Synod and beyond.

By General Synod Communications on September 5, 2014

Three years at its synod gathering the Diocese of Nova Scotia and Prince Edward Island took the pulse of those gathered to see what social justice issues were closest to their hearts. Poverty, homelessness, and education were all priority areas for these Anglicans, but it was environmental concerns that came to the fore. The diocese … Continued

By General Synod Communications on August 15, 2014

Justice Camp: Land meets in Edmonton from August 15 to 21, 2014, and brings together an intergenerational cohort from across the country for up close encounters with social justice issues. Participants will enjoy seven immersion experiences on topics ranging from the relationship between faith and the oil/tar sands, urban responses to systemic poverty, and interreligious … Continued 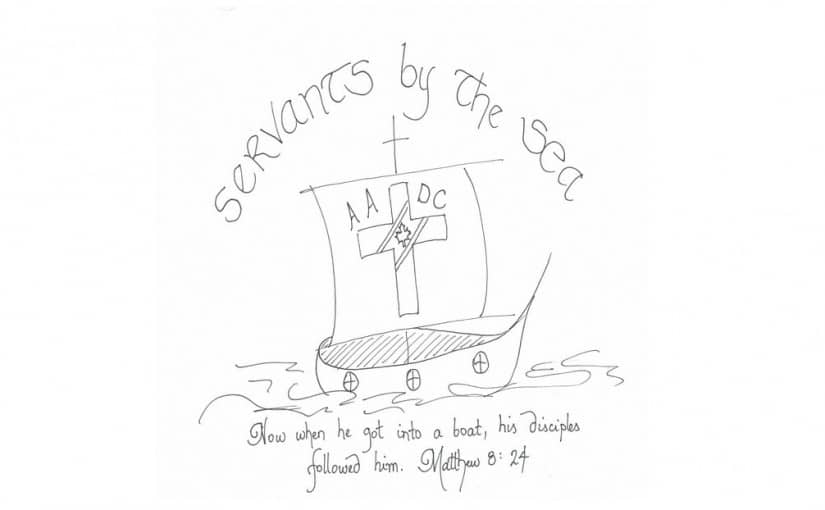 Servants by the Sea: Deacons to gather in Halifax

The Association of Anglican Deacons in Canada will gather in Halifax, Nova Scotia from August 14 to 17 for a time of fellowship and community building.  Throughout “Servants by the Sea,” deacons from across the Canadian church will enjoy workshops suited to diaconal ministries, including ones on advocating for the unemployed, outreach in the 21st … Continued

By General Synod Communications on August 13, 2014

Excitement is high for the upcoming gathering of hundreds of Canadian Lutheran and Anglican at CLAY 2014. From August 14 to 17, upwards of 600 of the most passionate and talented 14- to 19-year-olds from the Evangelical Lutheran Church in Canada and the Anglican Church of Canada, will convene in Kamloops, BC. CLAY is held … Continued

From July 18 to 23, Edmonton will host more than 200 Anglicans and Lutherans passionate about worship for a time of fellowship and learning at the National Worship Conference and related events. A pre-conference symposium with David Cherwien, an internationally acclaimed organist, conductor, and composer, will give participants the opportunity for personalized feedback and features … Continued 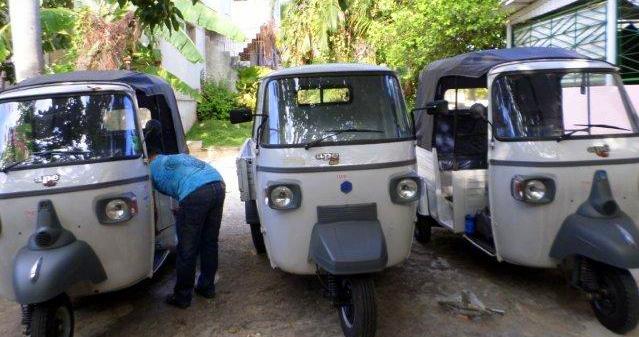 Mission, Ministry, and Motorcycles in Cuba

On June 26 and 27 Bishop Griselda Delgado del Carpio, diocesan bishop of Iglesia Episcopal de Cuba enjoyed a pastoral visit with Archbishop Fred Hiltz, Primate of the Anglican Church of Canada and chair of the Metropolitan Council of Cuba. To celebrate this visit, we are highlighting some ways the ACC and IEC are living … Continued

Keeping Anglicans Talking (KAT) is a new online video resource featuring short, compelling talks by notable Anglicans. Each talk touches on a different aspect of how Anglicans are living out the Marks of Mission locally and globally. The first round of ten videos is now live at the KAT website and focusses on stewardship, giving, … Continued 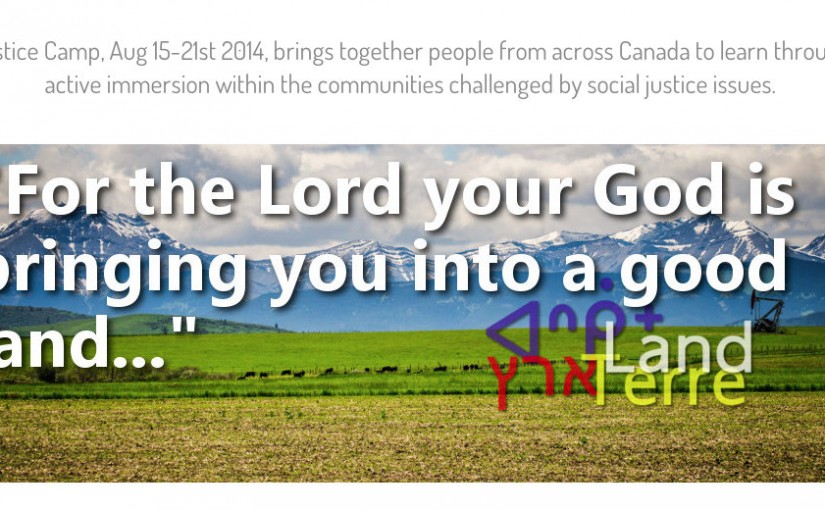 By General Synod Communications on June 26, 2014

Early bird registration for Justice Camp 2014 closes on June 30, 2014. Sign up now to save on the cost of registration and to guarantee a spot in the immersion learning experience of your choice! Participants can choose from non-resident and resident options. The non-resident option is available to those who will arrange for their … Continued 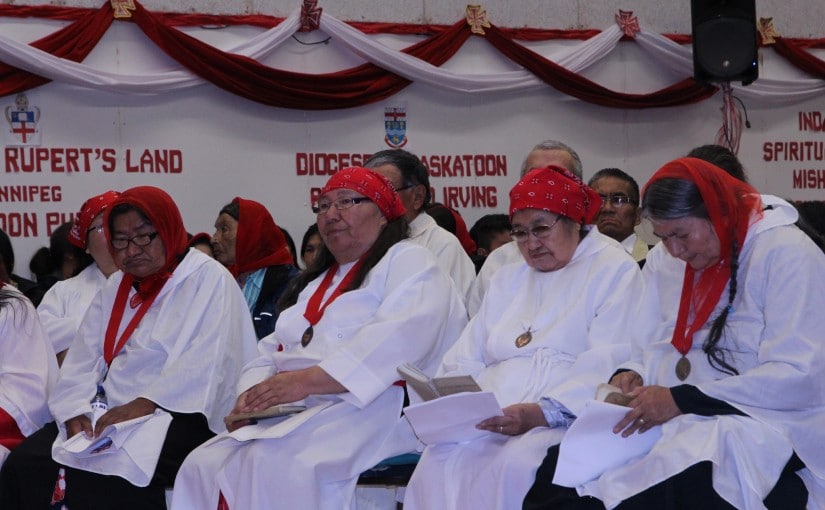 Saturday, June 21 is National Aboriginal Day of Prayer. The Anglian Church of Canada invites its members and parishes to join in celebrating Indigenous culture and continue the journey toward right relationship on this day. Churches may also wish to acknowledge the day during Sunday liturgies on June 22. Here are a number of excellent … Continued 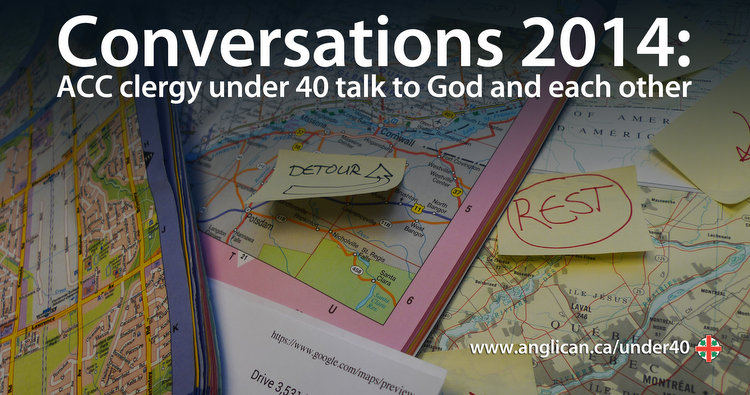 Conversations 2014: Clergy under 40 to gather in Montreal

From June 17 to 19 the Diocese of Montreal will host a gathering of Anglican Church of Canada clergy under the age of 40. This time of professional development, discernment, and relationship building will bring together thirty-five participants from all across the country. The gathering will follow an ‘unconferencing’ approach, which leaves rooms for more … Continued 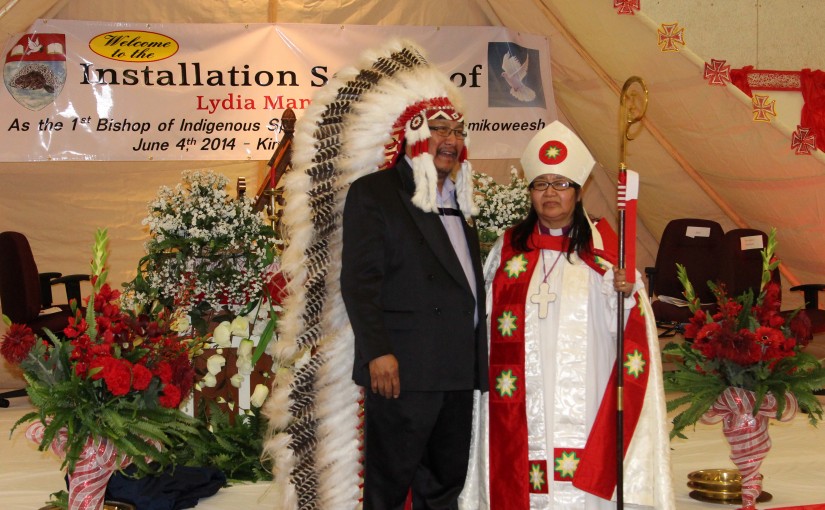 On June 1, 2014 the Indigenous Spiritual Ministry of Mishamikoweesh came into being. The creation of this new diocese marks a major milestone in the journey of establishing of a self-determining, self-sustaining Indigenous church within the Anglican Church of Canada.The new encompasses over twenty-five First Nations communities in Northwestern Ontario and Northern Manitoba. On June … Continued 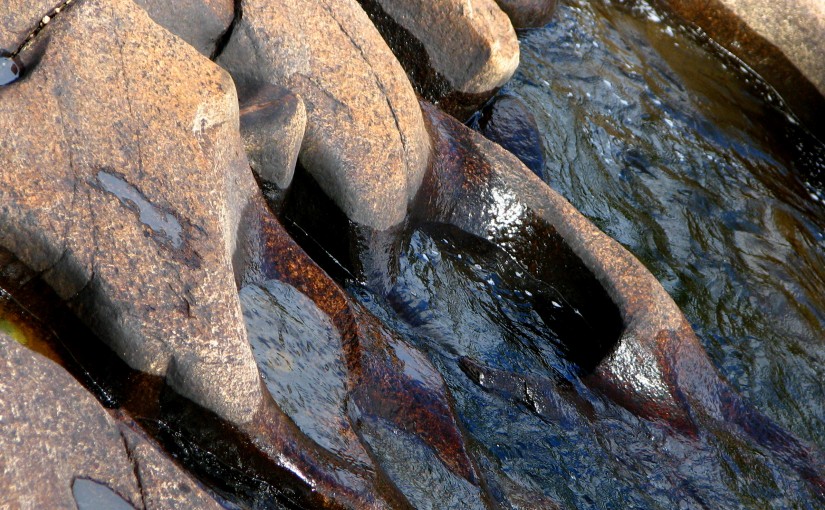 By General Synod Communications on June 9, 2014

The Turtle Island Consultation on Pastoral Care for Suicide in Indigenous Communities June 19-22, 2014 St. Peter’s Anglican Church Six Nations The Office of the National Indigenous Anglican Bishop, Anglican Church of Canada and the Indigenous Theological Training Institute of North America are partnering to bring Indigenous experts together to help create a resource for … Continued 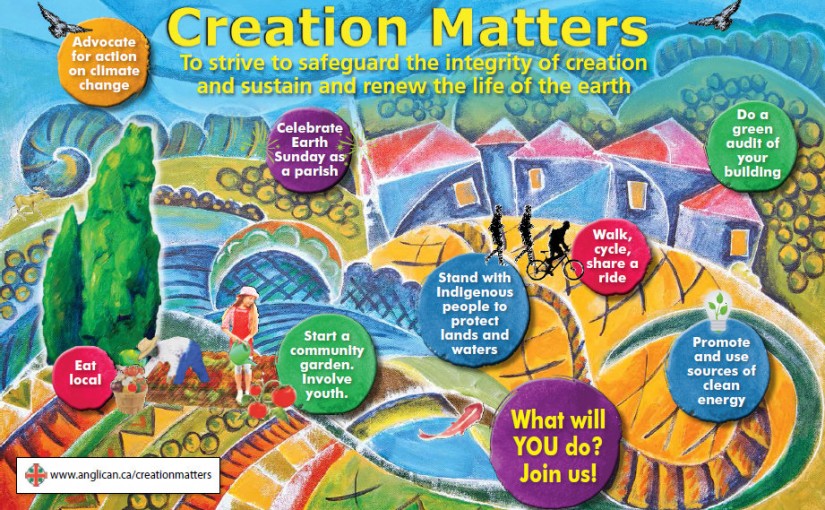 Creation Matters, the environmental working group of the Anglican Church of Canada, is happy to share a brand new resource to help people and parishes live out the Fifth Mark of Mission. In vibrant full-colour, the poster shows a number of everyday ways to “safeguard the integrity of creation and sustain and renew the life … Continued