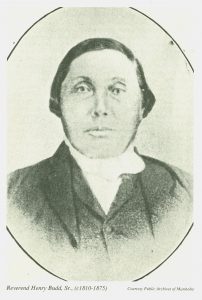 The Rev. Henry Budd ([ca. 1812]-1875) was the first aboriginal person of the Americas to be ordained an Anglican priest.  He was born at Norway House, Rupert’s Land and named Sakacewescan (Going-up-the-Hill).  His name was changed when he was baptised by John West July 21, 1822.   He was educated at the Church Missionary Society school at Red River Settlement.  Budd left the school about 1827 to become a clerk for the HBC.  He married in 1936 and returned to Red River with his wife and bought farm land near St Andrews. In 1837 he was persuaded by David Thomas Jones and William Cockran to teach at the Upper Church (St John’s) parish school.  He went to The Pas in the spring of 1840 as school teacher and catechist.  In 1850 Henry Budd and his son returned to Red River where Henry was taught theology by Bishop David Anderson.  Budd was ordained deacon in December 1952 and priest in June 1953 in Christ Church, The Pas.  Soon after, he was sent to Nepowewin (Nipawin, Sask.) where he remained in charge there until 1867, when he returned to minister at The Pas.  Budd remained in The Pas until his death and is buried there.  There is a Christian Leadership Training School named after Henry Budd in The Pas.

Fonds consists of photocopies of 17 letters written by Henry Budd primarily while he was at The Pas to someone at the Red River Settlement.

GSA holds several articles and publications about Henry Budd in the historical library.

Please contact the Archives for more information on this record.