As the world commemorates the International Day of Peace and Non-violence on September. 21, the World Council of Churches (WCC) is calling on all its member churches to pray for peace on the Sunday preceding or following that day. 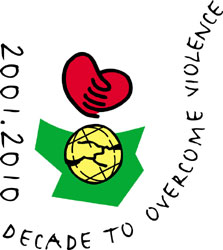 This is the second time that the WCC has called its members to observe theInternational Day of Prayer for Peace, which was launched last year. This initiative comes within the framework of the WCC’s, Decade to Overcome Violence (DOV): Churches seeking Reconciliation and Peace (2001-2010) and is linked to the International Day of Peace declared by the United Nations General Assembly.

This global 24-hour spiritual observance for peace is meant to demonstrate the power of prayer and other spiritual practices in promoting peace and preventing violent conflict.

“We believe that for Christians, it is appropriate to join the concern and desire of humanity for peace and non-violence by applying their most consistent way of intervening in world affairs, that is, by prayer,” said the Rev. Samuel Kobia, WCC general secretary, in his invitational letter addressed to WCC member churches.

Dioceses and parishes are encouraged to use the ecumenical liturgical resources provided by the WCC for the prayer vigil in their churches.

Churches are also encouraged to be creative in their actions and communicate their experiences to others by sharing them on the website of the WCC Decade to Overcome Violence.

Liturgical resources for the International Day of Prayer for Peace are available on the Decade to Overcome Violence website:www.overcomingviolence.org