The following announcement was made by Archbishop Fred Hiltz, the Primate, and Bishop John Chapman of Ottawa today. 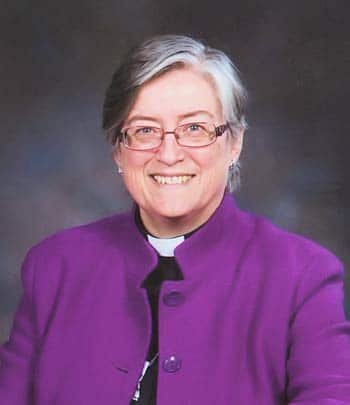 The Rev. Laurette Gauthier Glasgow has been appointed Special Advisor for Government Relations for the Anglican Church of Canada (The General Synod and the Diocese of Ottawa) while also continuing as Incumbent for the Parish of St. James, Leitrim, in the Diocese of Ottawa.

In a joint announcement, Archbishop Fred Hiltz, Primate of the Anglican Church of Canada, and Bishop John Chapman of Ottawa, expressed delight in co-sponsoring this half-time position that responds to a long-standing desire on the part of the church to establish a government relations presence in Ottawa. This was also a key recommendation from Vision 2019, endorsed at General Synod 2010.

“This local presence will help facilitate the church’s relationships with elected representatives and government officials in Ottawa, giving us a stronger voice, greater focus, and an enhanced capacity to contribute to public policy discussions and formation, consistent with the tenets of the Gospel” said the Primate. “This presence will build upon the church’s efforts as an advocate for peace and justice.”

Bishop Chapman whose Government Relations Advisory Panel on which Ms. Glasgow serves has been laying the groundwork for engaging government in meaningful dialogue on a range of policy issues and priorities, welcomed the joint initiative. “The time is ripe for us to move in this direction, to claim our place, as one religious voice among many in the shaping of policies and in constructive engagement on behalf of those for whom we speak,” he said.

Archbishop Hiltz and Bishop Chapman noted Ms. Glasgow’s extensive public policy and diplomatic experience, her sound theological grounding, and her experience in parish ministry and church governance as unique qualities and gifts that make her eminently suited to this new challenge.

“You never know where the Holy Spirit will lead you, but you learn to trust that inner voice, to take the leap of faith, and to respond honestly and faithfully,” Ms. Glasgow said. “I look forward to working with our partners in fostering greater cooperation and advancing the church’s policy priorities.”

Ms. Glasgow, originally from Winnipeg, is no stranger to leaps of faith. She earned a B.A. from the University of Manitoba and an M.A.  in International Economics from Johns Hopkins University in the United States and served in the public service at home and on three continents abroad for more than three decades.

She read for Holy Orders in Europe and spent several summers at the Oxford Continuing Education School in Theology before being ordained deacon in Paris in 2007 and priest in Brussels in 2008. She served as an Assistant Rector in Brussels before returning to Canada and the Diocese of Ottawa. She  has served  as  assistant at Christ Church Bells Corners, Interim Priest in Charge at St. James Franktown and St. John’s Innisville, and more recently as Incumbent at St. James, Leitrim.

Ms. Glasgow is also serving as a member of the Ottawa Diocesan Council, the Spiritual Care Board of the Queensway-Carleton Hospital, and the Advisory Board of the Centre for Religion in Public Life at Kellogg College, Oxford, as well as an Ambassador for Women for Mental Health in Ottawa.

She is married to  Ross Glasgow, a diplomat. They are the proud parents of two children—Katherine of Ottawa and Robert who lives in London, Ont. with his wife Candice.