In 2019, the new Canadian Church Calendar brings together the best of both worlds: a reflection of our beautiful Anglican tradition in twelve Canadian cathedrals, and the ministry that each cathedral community leads inside and outside the walls of its church buildings. The calendar deftly weaves together photographs of Anglican cathedrals with the church’s ministry across Canada and around the world through the theme “Inside and Out”.

“Sometimes [in past calendars] we’ve focused on the buildings and what’s in them, and sometimes we’ve focused on the way the church engages in God’s work in the world, and so this was a way of bringing those two things together,” General Secretary Michael Thompson said. “So these are the places where we gather, and these are the things that we do in the world … inside and out.”

Thompson described the theme as emphasizing unity between the life of the church and the interaction of its members with the wider world.

“One of the maybe not-so-helpful ways of thinking about all of this is that what goes on inside the church is for the members, and what goes on outside the church is the members serving the world,” the General Secretary said. “It makes the church sound kind of like a clubhouse, when in fact, part of our work is to invite people into the encounter with God that we typically understand as happening … at least in the gathered community … inside a lovely church that has been built and cared for with great love and attention.”

He drew a comparison with the word liturgy defined as a “public good that is provided by private contribution”, one that “provides a potentially life-changing encounter with God.” Liturgies inside the church, Thompson said, are “seamlessly related to the other liturgies of the church, in which we feed the poor … in which we bear witness to God’s desire for peace, in which we struggle against racism and the detritus of colonialism.”

The month of March, for example, features a photograph of 3,000 origami cranes hanging at the Cathedral Church of All Saints in Halifax, as well as a quote from Matthew 5:9, “Blessed are the peacemakers”. The art display was a response to the tsunami in Japan, but Thompson noted the association of paper cranes with the atomic bombing of Hiroshima, describing the image as an illustration of the church’s witness for peace.

In the September spread, the calendar depicts a young child, Marco, learning math by playing dominos at St. Hilda’s Anglican School, a mission of the Diocese of Fredericton in Belize. 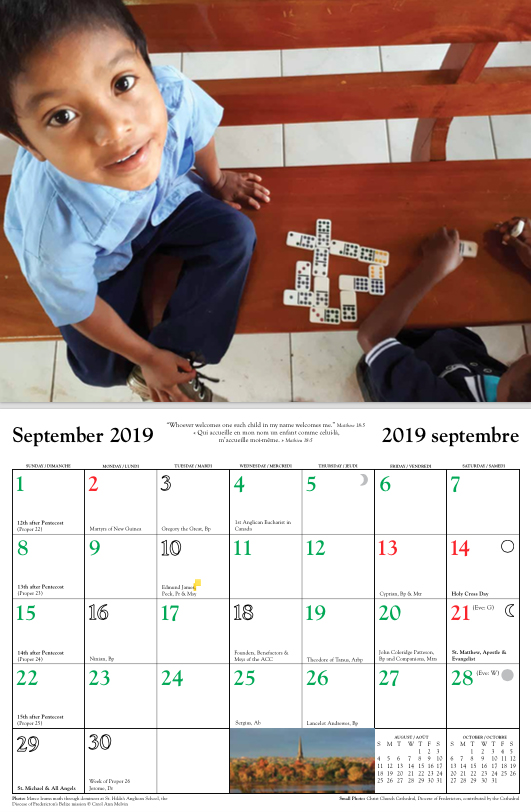 Since 2005, Christ Church Cathedral in Fredericton has helped support the school, offering sponsorships to students and donating funds twice a year to help maintain operations. Carol Ann Melvin, a parishioner at Christ Church Cathedral and volunteer on its Belize Mission Committee, took the photograph during a week-long mission trip in which she helped bring educational games to the students.

“We basically hugged the kids as much as possible and had all kinds of games, and we supported the teachers working in small groups,” she recalled. She and her fellow parishioners also spoke to older students, offering positive messages of self-confidence and talking with them about their plans for the future.

“This is a poor community in Georgetown, Belize, and so we were giving as much love to the kids because we know that the families were challenged financially and that adds on its own stresses,” Melvin said. “Every child can always use more love, and we felt that these children perhaps could benefit from our love and just spending time with them … working on their basic educational skills … but maybe [also] on a spiritual level … that they would know that we were there and we came just for them, and we loved being with them, and they were important, and we were excited to see them everyday.”

The 2019 Canadian Church Calendar will be available for order in early July. Copies of the calendar cost $5 plus tax, or lower at bulk order prices, and can be ordered from Parasource or directly from your regional calendar secretary.