Online presence to focus more on news between editions

The Anglican Journal has revealed its new, improved online look. The Web site of the Journal, the 131-year-old national newspaper of the Anglican Church of Canada, has undergone its first redesign since the site’s inception in 1998. 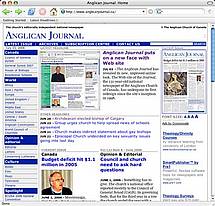 The new site for www.anglicanjournal.com has a cleaner and more user-friendly layout. It is equipped with a more powerful search engine and the ability to connect stories, like articles on similar topics or special coverage of events like General Synod. The site also has the capacity for more features that will be added in the coming months, including multi-media ability (to incorporate audio and video). “As we get to learn the new system, we will be able to take advantage of the new features and roll them out gradually,” said Brian Bukowski, web manager.

“The old site was very good at presenting the newspaper as issues online, but that’s not how people read newspapers online,” said Mr. Bukowski, explaining the reason for the redesign.

The new site does a better job of demonstrating that the Anglican Journal has become more than a monthly newspaper, said editor Leanne Larmondin. While readers of the hard copy newspaper are not forgotten, she said, some constituents want more news of their church to come from their church newspaper in addition to secular sources. “More and more, we’re using the Journal Web site to feature breaking news that happens between issues of the newspaper. Before now, those stories tended to get lost on the site’s home page since they simply appeared as a list of headlines above the current issue’s headlines,” said Ms. Larmondin. “This site allows us to have the best of both worlds: current news stories and the monthly paper.”

The biggest challenge in the site redesign was importing the content – some 3,200 stories since 1998 – from the old site into the new design. “It’s been interesting to see the journey of the stories of the church rather than just read stories grouped by issue,” commented Mr. Bukowski.

The new site moves the Journal “toward organizing stories by topic rather than by the newspaper issue, although the issue will still be there,” said Mr. Bukowski. Once all of the stories are categorized, readers will be able to find all of the stories about, for instance, the recent meeting of the Episcopal Church’s General Convention or the residential schools issue.

“You will also be able to quickly print a copy of the article or e-mail it to your friends, or even easily increase the size of the type in the story,” noted Mr. Bukowski.

The redesign was made possible by the success of the Journal’s annual fundraising appeal, which collected a record amount in 2005. The site includes a powerful, new search engine – called the Google mini – which can search for information not just on the Journal Web site but also the main Web site of the Anglican Church of Canada, www.anglican.ca