Home > News > Gathering Day: ‘We are all in this together’

A strong contingent of Anglicans were among thousands of people who gathered in the nation’s capital on Sunday, May 31, as the closing ceremonies of the Truth and Reconciliation Commission (TRC) officially got underway.

The opening day of the TRC closing saw an estimated 10,000 people participate in the Walk for Reconciliation—which followed a 4.7-kilometre route from the École secondaire de l’Île in Gatineau, Que., through Victoria Island and ending in front of Ottawa City Hall—to show solidarity with Indian residential school survivors and commit to improving relations between Aboriginal and non-Aboriginal people in Canada.

“I think that it’s really encouraging to see the numbers that are here now participating in these events, because they’re the people who are going to continue the work of reconciliation,” Finlay said.

The official beginning of the TRC closing ceremonies took place at sunrise on Victoria Island. Archdeacon David Selzer represented the Anglican Diocese of Ottawa at the lighting of the Sacred Fire, which was followed by a pipe ceremony and water ceremony.

The Walk for Reconciliation, however, dominated the day’s proceedings. Speakers at the start and end—who acknowledged that the TRC closing was taking place on unceded and unsurrendered Algonquin territory—stressed the importance of remembering the tragic past of residential schools and listening to the stories of survivors, while noting that the work of reconciliation was only beginning.

Speaking at City Hall, Justice Murray Sinclair, TRC commissioner and chair, reiterated the systemic mistreatment and abuse suffered by at least 150,000 First Nations, Métis and Inuit children from the 1870s to the closure of the last residential school in 1996.

The schools, Sinclair said, represented “no less than a systematic and concerted attempt to extinguish the spirit of Aboriginal peoples” across seven generations.

While reconciliation would take many years, he added, the commitment demonstrated by walk participants showed the way towards a shared future.

Anglican walker Melanie Delva, archivist for the Diocese of New Westminster, who served as part of the advisory committee to commissioners and the pilot project for the TRC document collection process, echoed his sentiments.

“I think the walk changes everyone who is in it…I think it’s a visible symbol that we’re going to continue to walk, literally and figuratively,” Delva said.

Acknowledging a fear that the church and wider Canadian society would view the closing ceremony as the end of the truth and reconciliation process, she pointed to examples of the church’s continued commitment such as the #22days project, or efforts by her diocese to stand with Indigenous peoples on issues such as resource extraction.

Following the walk, Anglican leaders attended a Circle of Prayer ceremony at the Human Rights Monument. The ceremony included a symbolic laying of stones as a statement of memory and hope. 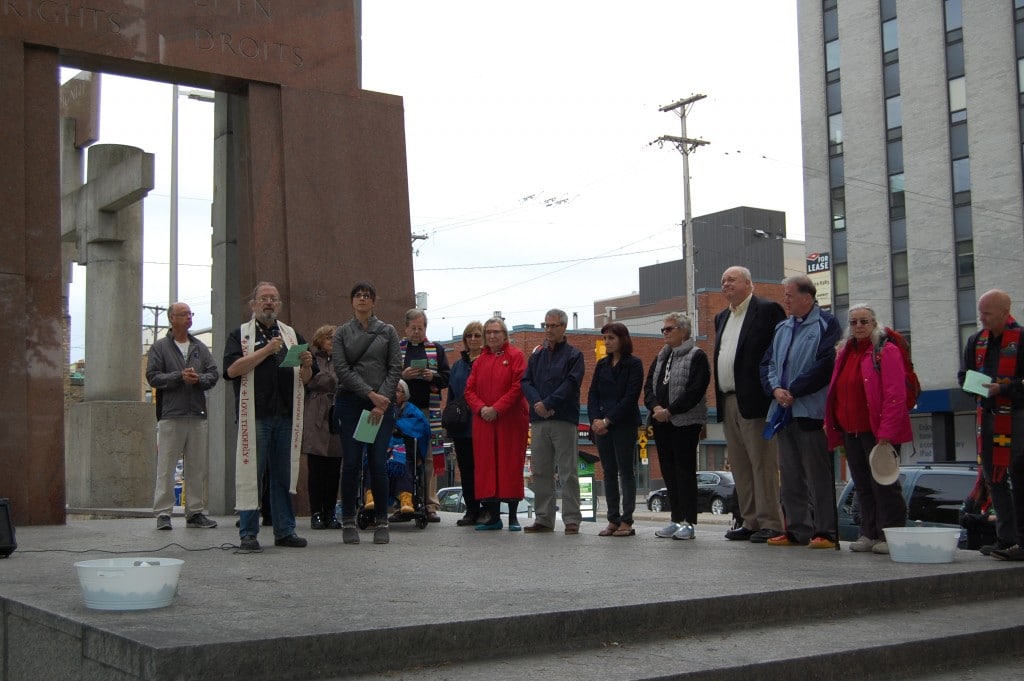 The leaders of the four denominations named in the residential school settlement —Anglican, Roman Catholic, Presbyterian, and United—laid the first stones, with Archbishop Hiltz laying a stone on behalf of the Anglican Church.

Reflecting upon the first day of the national event, Bishop MacDonald said he was encouraged by the high morale of those in attendance, marked by a sense of hope and forward movement.

“There’s a strong sense of commitment and perhaps even courage about what the future might be,” Bishop MacDonald said.

“I think that non-Indigenous Canadians are really grasping that this is about a good future for everybody. It’s not just about feeling bad for the past. So I’m very hopeful [and] very happy about what happened, and I think it’s a good way to begin the rest of our existence as a nation.”