The life and work of Archbishop Michael Peers, former primate of the Anglican Church of Canada, were the focus at Church House on Thursday during the official launch of the book More Than I Can Say: Michael Peers—A Memoir.

A collection of stories and anecdotes from more than 70 contributors who have known Peers through the decades, the book offers an intimate glimpse into the life of the former primate, from his time in the Prairies to his celebrated tenure as head of the church, which included a historic apology to the First Nations peoples of Canada for the role the church played in the Indian residential school system.

With his characteristic good humour, Peers noted after the launch, “I’m very grateful that people would want to produce something like this, which will bring a lot of things together that I couldn’t remember myself.”

If the former primate was modest about his contributions, others attending the launch were more than happy to lavish praise on Peers.

The event kicked off with a packed Eucharist celebration onsite in the Chapel of the Holy Apostles, where Archbishop Fred Hiltz, current primate of the Anglican Church of Canada, offered words of welcome. 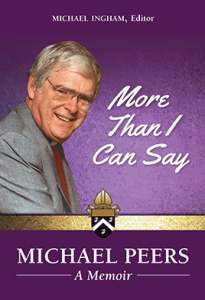 Drawing upon passages from the book, he detailed a lengthy list of titles attributed to Peers, including bishop, metropolitan, linguist, historian, navigator, diplomat, recipient of 13 honorary degrees, and perhaps most significantly, “friend.”

“It’s clear as you read the book, he’s known for having the mind of a scholar,” Hiltz said.

Following the Eucharist, attendees moved to a reception upstairs. Refreshments were followed by remarks from Bishop Michael Ingham, General Synod’s first principal secretary and editor of More Than I Can Say.

Ingham thanked Hiltz for initiating the project, the Anglican Foundation of Canada for printing and circulation, partner Nancy Southam for devising the title and format, and Peers himself, noting the ease with which he was able to find contributors for the book.

“Everywhere you go…in the Anglican world, people still tell stories of Michael Peers, when he said this or he did that,” Ingham said. “His name has long lasted after his tenure.”

One contributor was former governor general Adrienne Clarkson, who attended the launch and referred to Peers as “one of the most extraordinary friends and leaders that I have ever met…I think the church was very lucky to have him to lead us through an extremely difficult time.”

Archbishop Michael Peers prepares to sign copies of ‘More Than I Can Say: Michael Peers—A Memoir’ at the official launch of the book. Photo by Marites Sison/Anglican JournalIn his own remarks, Peers thanked all who had contributed to More Than I Can Say, connecting his early years in the church to his experience as primate with a common theme from the Gospel of Mark: “Love the Lord thy God with all thy mind.”

Affirming his success in that goal, Bishop Gordon Light, who also served as principal secretary and offered prayers of thanksgiving, praised Peers’ knowledge of the international church and his ability to “hold things together and see the church in a larger way than most of us ever experienced it, and the capacity to share that with others, too.”