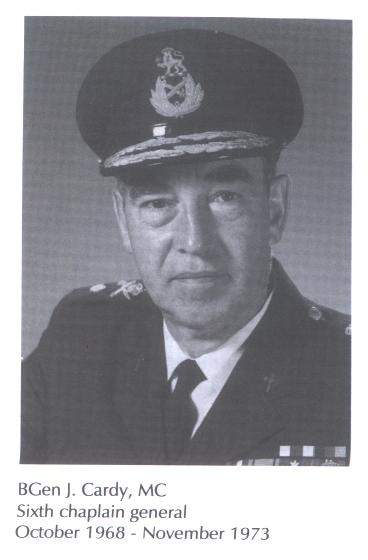 Padre Joseph Cardy, or “Padre Joe” as he was universally known to the troops, is a key figure in the history of our Ordinariate.  A chaplain distinguished for his courage, humility, and leadership, he was an influential figure in the shaping of the modern chaplaincy.

A native of Port Credit, Ontario, Cardy did his BA at the University of Toronto and graduated in theology from Wycliffe College in 1941.  He spent World War II as chaplain to the Essex Scottish, an infantry regiment from Ontario that served in NW Europe.  During his service he was awarded the Military Cross for courage shown while evacuating the wounded under fire.  His MC citation states “Highly respected and admired by all ranks, [Cardy] is an outstanding example of his own teaching that morale and character in the fighting soldier arise from a Way of Life”.

Cardy was one of the so-called “Twelve Apostles”, the twelve Protestant chaplains authorized to remain on the strength of the Canadian Army Chaplain Service following the war’s end in 1945.  These were seasoned veterans of the war in Europe, many of them decorated for gallantry, who were invited to remain in the Army.  Much of their postwar work involved building base infrastructure and services that we would take for granted today.  For example, after many underpaid soldiers were stuck with bad loans at Borden in the late 1940s, and being told by the base commander that “The chaplain shouldn’t be the font of all blessings,” Cardy pushed for the creation of a base benevolent fund, the first of its kind in the Canadian military.

It was veterans like Cardy and Roy Durnford who were tasked with training and leading new chaplains recruited for the Korean War.  In late 1950, Major Cardy was sent to Wainwright to lead a team of seven chaplains preparing to deploy to Korea.  Albert Fowler, a former military chaplain and historian of the postwar chaplaincy, describes Cardy as “a rather tough or severe chaplain”, who besides training his chaplain recruits also found time to prepare one hundred and twenty men for confirmation while in Wainwright.

By the time Cardy and his chaplains got to Korea the war had become largely static.  The padres had time to set up chapels and a Christian leadership school in canvas camps behind the lines.  Cardy also worked closely with a United Church medical missionary to find ways, such as repairing orphanages, to keep the troops busy and fulfilled when they were out of the line.  The war could still be dangerous, however.  On one occasion he was orienting a brand new reservist chaplain when they came under mortar fire.  Only Cardy realized the peril they were in.  As Fowler tells the story, “I want to see what kind of shape you’re in Matt,” Cardy shouted, “see how quickly you can get under that tank.”   On his return from Korea in 1953, the Montreal Gazette reported that there wasn’t a dugout or fighting position he had not visited.

In his subsequent career, particularly in his term as Chaplain General from October 1968 to November 1973, Cardy presided over massive changes in the chaplaincy and in the Canadian Forces.  These changes included bringing chaplains under the scope of military promotion boards and annual Personal Evaluation Reports, integration of the chaplaincy, unification of the Forces and the dawn of modern peacekeeping operations.  Cardy’s role as CG in this period deserves greater attention than it has been afforded to date.  Padre Joe died in Victoria on 2 August, 2002, and his funeral was held at St. Luke’s Anglican Church.  He deserves a place in the memory of our Ordinariate, for he embodies an example of bravery and servant leadership at all levels.

Padre Mike Peterson is the Base Chaplain at CFB Suffield.