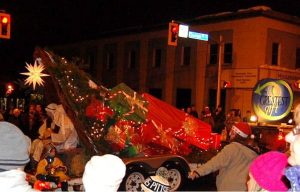 Sharing the Good News in spectacular fashion with a Christmas parade float depicting the birth of Jesus, the Deanery of Algoma is the latest beneficiary of the Marks of Mission Champions initiative, organized by the Anglican Church of Canada.

An effort to promote the five Marks of Mission, the initiative provides $1,000 grants to each of the 30 church dioceses across Canada for the support or development of projects related to the Marks of Mission.

Algoma’s eye-catching contribution centres around the first Mark of Mission, urging believers “to proclaim the Good News of the Kingdom.” The float features a pile of presents with a sign that says, “The Greatest Gift.” As the float passes by, the traditional Holy Family at the Nativity is revealed at the back, flanked by costumed walkers dressed as magi, shepherds and angels.

The concept for the float predates Marks of Mission Champions, with Dean James McShane of St. Luke’s Cathedral in Sault Ste. Marie, Ont., first hatching the idea more than a decade ago in reaction to the perceived secularization and commercialization of Christmas.

“I’d heard lots of people use the line, ‘Let’s put Christ back in Christmas,’” McShane recalled. “I think of course that’s a wonderful intention, but one of the difficulties is for many people, Christ has never been part of their celebration of Christmas.

“You can’t put something back where it hasn’t [been] before, yet I think people quite understand the notion of gift-giving at Christmas. So I thought it was a positive way of introducing Christ into Christmas for those who haven’t known [that] or perhaps have forgotten about it.”

While the concept for the float had been around for some time, it was only through Marks of Mission Champions that the opportunity arose to turn the idea into a reality.

Having taken the proposal to the deanery council and received a positive response, members of the deanery submitted an application to the church, and soon received the grant that paid for most of their materials. 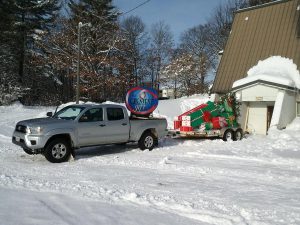 A team of volunteers, including clergy and laypeople, worked feverishly to prepare the float for Christmas parades throughout Algoma and district. The float made its debut in the community of Blind River, Ont. before taking part in parades in Sault Ste. Marie and Echo Bay.

McShane, who drove the truck towing the float, described reactions at the parades as “delightful,” with beaming young faces, applause, and a sense of warmth and good cheer.

He encouraged other dioceses across the country to take advantage of the Marks of Mission Champions grants.

“I think it’s a wonderful partnership between the national church and local congregations and dioceses,” McShane said.

“That’s not always easy, but I think it’s a really good thing to do and [it] invites us to find new ways to be doing the mission of the church.”