The Rev. Karl McLean, a member of the Council of General Synod for the past two triennia, has been appointed Chaplain General of the Canadian Armed Forces. 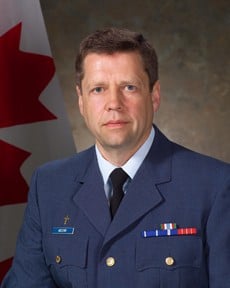 What follows is the Department of National Defence announcement of the appointment.

The Honourable Peter MacKay, Minister of National Defence, is pleased to announce the selection of Padre Karl McLean as the next Canadian Forces Chaplain General. Colonel McLean will be promoted to the rank of Brigadier-General and assume command of the Chaplain Branch later this year, succeeding Brigadier-General David C. Kettle, who will retire.

“Chaplains provide the men and women of our Canadian Forces with the moral and spiritual support that they require in their service to the nation,” said Minister MacKay. “Padre McLean brings with him a wealth of knowledge and experience that will give him unique insight in this crucial leadership role.”

Padre McLean’s experiences in the Canadian Forces (CF) chaplaincy include serving as a unit, wing and base chaplain in several locations; as the Chief Instructor at the Canadian Forces Chaplain School and Centre; and as the Command Chaplain for both the Army and the Air Force. His international experiences include deploying as a Brigade Chaplain in Bosnia-Herzegovina and serving as the Senior NATO Chaplain with the Stabilization Force in the capital of Sarajevo.

Colonel McLean has previously served in the Office of the Chaplain General as the Director Chaplain Administration Education and Training; the Director of Chaplain Operations; and, most recently, the Chief of Staff.

The Chaplain General heads the multi-faith Chaplain Branch and advises the Chief of the Defence Staff and the Chief of Military Personnel on matters related to the moral and spiritual well-being of personnel and their families in all aspects of their lives. He or she serves a two-year term and is responsible for recruiting, training and managing the ministry of chaplains within the CF.