The Anglican Church of Canada will join the world in commemorating World AIDS Day on Dec 1. 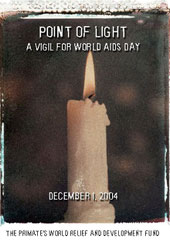 World AIDS Day is a time to reflect on the fight against AIDS and raise awareness about the pandemic. First declared by the World Health Organization in 1988, this day celebrates progress made in the battle against the disease and brings into focus the challenges that remain.

According to UN statistics, AIDS has killed more than 20 million people since the first cases were diagnosed in 1981, including 2.9 million in 2003 alone. It is estimated that 37.8 million people were infected with HIV at the end of 2003. Sub-Saharan Africa is the worst hit region, with 70 per cent of all people living with HIV.

This year’s theme for World AIDS Day focuses on women, girls and HIV/AIDS.

The Anglican Church of Canada, through the Primate’s World Relief and Development Fund (PWRDF), produced The Point of Light Vigil for use by dioceses and parishes during the commemoration services on Dec 1.

Point of Light is a project supported by PWRDF in Etwatwa, South Africa. Mothers in their 20s and 30s who know they are dying of AIDS gather weekly at Point of Light houses to share experiences and to build memory boxes that will be given to their children when they die.

The vigil is designed for use during the first week of Advent; however, it can be adapted for use throughout the year. Vigil materials consist of a leader’s guide and complete text, an order of service for participants, and 12 letters written by the women of Etwatwa.

“We hope that the letters from Etwatwa in South Africa, will be mirrored here locally in Canada, to encourage people to connect more with local AIDS communities and to take ownership and make people realize that we are all in this fight together,” said Adele Finney, PWRDF resource producer.

The vigil is part of the PWRDF Partnership for life — for a Generation Without AIDS, campaign launched on Dec.1, 2003. The purpose of the campaign is to increase the capacity to support PWRDF partners in their fight against AIDS. It aims to raise $1 million from parishes, foundations and government sources.

As of Sept. 30 2004, more than $129,000.00 had been raised, said Jill Martin, PWRDF financial and systems manager, noting that, “more money is still coming in from the dioceses and parishes.”

A number of resources are available for diocese and parishes to use during the campaign. A package that provides basic information needed to engage parishes, families, friends and communities in the struggle against HIV/AIDS has been sent across the country.

A video based on HIV/AIDS projects run by PWRDF partners in Uganda is now out. The video, produced by Anglican Video also includes a 42-minute presentation by Stephen Lewis, Special Envoy for HIV/AIDS in Africa for the Secretary-General of the United Nations, at General Synod 2004.

The video is accompanied by a study guide, said Ms. Finney.

Also available for dioceses and parishes is the Ribbon of Hope sewn together out of hundreds of swatches of silk-screened indigo blue denim cloth. Each of the denim patches is marked with individual prayers, concerns and memorials to remember friends and families who have lost loved ones and those currently infected by HIV/AIDS.

The ribbon has been exhibited at different PWRDF regional meetings, in Kingston, Ont., Halifax, in British Columbia and at the diocese of Niagara Synod. At each of these meetings, more denim patches were added to the ribbon, which has grown to 50 feet from its original 40.