Taken from the personal reflections of Capt the Rev Liam Thomas, Fleet Chaplain, CFB Halifax (While serving in HMCS ATHABASKAN).

Today was pretty amazing.  The service was great and the Dean of the Cathedral, Fr. David Howell, was more than generous with the amount of the service I was able to help celebrate.

The Cathedral isn’t what we are used to; the Gothic Style

like in Canada, but more like a mission church you would see in Mexico; just plain painted walls outside.  There is also a school attached so when you enter, you enter into the court yard with the school around two sides and the Cathedral on the third, with the fourth wall being along the road.  It wasn’t a huge service but there was lots of energy and family and just a good feeling all around.

I joined David in the Sanctuary, proclaimed the gospel, led the renewal of our Baptismal Vows, consecrated the elements and led the prayer after Communion. The service is very similar to what we are used to with just a few changes. Oh, and I was given a Chasuble to wear during the Eucharist. They have lots of acolytes and it was quite the procession for the gospel.

There was a kind of interesting mix of ‘high’ church and Caribbean flair and music.  There was incense (thankfully just a bit) and bells, but the music/setting that was used for the Eucharist (like the ‘Holy, Holy, Holy’ and the ‘Amen’) were composed by a priest in the Caribbean and leading it was a choir of about 25 people with guitars, accordions and some rhythm instruments.  Amazing.

Being Easter, the kids did a performance with rousing renditions of some songs with a southern gospel-like organ accompaniment, plus of course we also had the ‘regular’ hymns.  It would have been cool to have been able to actually video the whole thing to send home. 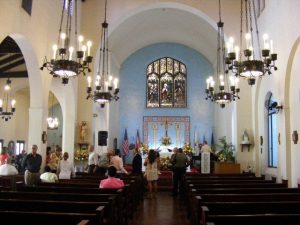 After the prayers of the people, which was done from the lectern during the announcements, they asked for those with any prayer needs or celebrations to bring them to the front of the church where the Priest and the acolytes all gathered around and said some prayers.  There was also a three week old baby for whom we gave thanks during this time of prayer.

It was interesting when people took communion, as the service I attended had folks from many different cultural backgrounds but whose language was English (the service just before was in Spanish).  So there were folks who ‘dipped,’ folks who received where the person with the chalice took the wafer, dipped it and placed it in the person’s mouth as well as those who drank from the cup.

I think what was great was that regardless of the differences, there was a real joy in being there and worshipping God.  I know I was blessed by the service and being able to celebrate on Easter Day.