From the World Council of Churches

Pope Shenouda III, spiritual leader of the Egyptian Coptic Church since 1971 and a president of the World Council of Churches (WCC) from 1991 to 1998, passed away of natural causes on Saturday 17 March. In a letter to the church dated 18 March, WCC general secretary Rev. Dr Olav Fykse Tveit paid tribute to Pope Shenouda’s unwavering pursuit of Christian unity and peace throughout the Middle East and the world. 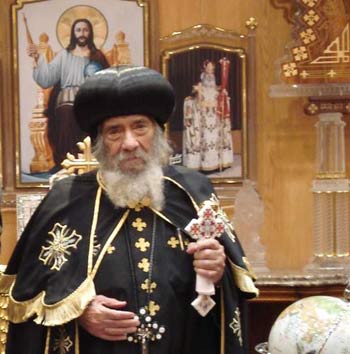 “As a leader he taught us that modesty is the best way to serve Christ,” wrote Tveit, noting that Shenouda is remembered as “a strong believer in Christian-Muslim conviviality and cooperation. His initiatives in the field of interreligious dialogue contributed to the unity of the Egyptian people.”

Archbishop Fred Hiltz, Primate of the Anglican Church of Canada, met Pope Shenouda during a meeting of Anglican Primates in Egypt in 2009. Archbishop Hiltz described him as “a source of great hope and strength to Coptic Christians the world over, including here in Canada.

Shenouda III held the ancient office of Pope of Alexandria and, as such, was a successor to Saint Mark the Evangelist who, according to tradition, brought the gospel of Jesus Christ to the great Mediterranean city in the first century A.D.

Tveit concluded his tribute with this prayer, “May Pope Shenouda’s words, witness and memory strengthen the faith of Christians in Egypt and the Middle East; and, may his soul rest in the peace of the Kingdom of God.”