My Role in the CFDS features military and civilian personnel and occupations throughout the Defence Team. Featured profiles use real-life stories to illustrate the dedication, excellence and professionalism of personnel and employees in their day-to-day jobs under the purview of the Canada First Defence Strategy (CFDS).

Padre Askew’s job as a CF chaplain often means that no day is like another. As a member of the Forces and an officer, she deals with the usual e-mail, phone calls and paperwork every day. However, her work is directed mostly by the needs of the people she serves.

Her most memorable moment as a CF chaplain came in April 2007, when she gave the Rededication Prayer for theVimy Memorial – in Cree. “I was strengthened as I thought of the sacrifice of those young men so long ago,” she says, “and most especially of the Aboriginal soldiers who, in their day, never heard a military chaplain pray in an Aboriginal language.”

CF chaplains provide pastoral care and guidance to personnel and their families— compassionate leave issues, marital counselling, spiritual direction—and advice to COs on the spiritual, ethical and moral concerns of the unit – workplace conflict and other broader issues.

“I work to help CF personnel and units be spiritually, ethically and morally healthy, thus enabling them to fulfill their mission,” she says. “These functions contribute to the overall operational readiness of individual members and of units as a whole.” 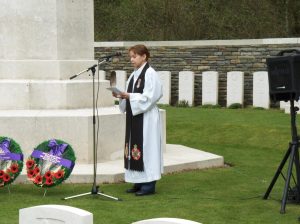 Padre Askew is an Anglican priest who received her Masters of Divinity from Trinity College Toronto. She has civilian experience as an advocate in indigenous justice issues and as the rector of her own parish in British Columbia. She’s worked alongside chaplains from many different churches and a variety of faith groups.

Her involvement in the Defence Aboriginal Advisory Group has given her the opportunity to explore her Aboriginal identity and work to address the needs of current Aboriginal Defence Team members.

When Capt Askew retires, she would like to know that Aboriginal identity is an integral part of the identity of the whole Defence Team. “I would like to look back and see that Aboriginal people following a traditional path in their spirituality are able to do so freely and easily within the Defence Team,” she says. “We are walking that path now but we are still very early in the journey. 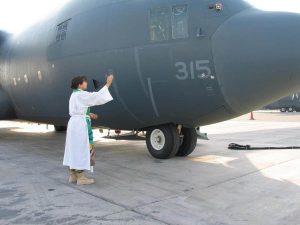 “I believe that, in celebrating and supporting the individuality of our members, we will have a healthier Defence Team as a whole.”

While her faith motivated her toward ordination in the Church, Padre Askew says, “it is the dedication, sacrifice and camaraderie of the Defence Team that energizes, inspires and sustains me in my role as a military chaplain.”