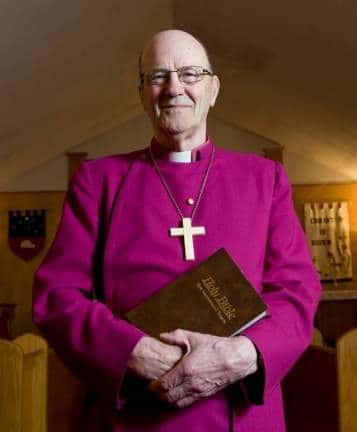 Bishop John R. Sperry stands in a long tradition of Anglican missionaries and evangelists to the Arctic that includes Isaac Stringer and Edmund James Peck.

Newly ordained, this young Englishman first went to the Canadian Arctic in early 1950, arriving in the settlement of Coppermine, now Kugluktuk. At that time, Kugluktuk’s population was seven Inuit families and about 12 southerners, living in snow houses and dependant on hunting and on the annual arrival of supplies by ship. In those days, all travel was by dog sled, and Sperry recalled travelling up to three thousand miles in a year this way.

Besides his pastoral duties, Sperry became the community’s dentist when the resident missionary left. As he recalled, “It was all straight extractions with lots of anaesthesia”, and Sperry considered himself fortunate in that “the teeth of the people in those days were particularly good, which was fortunate.”

In April 1952 Sperry married Elizabeth, an Englishwoman who had come to Aklavik the year before to serve as a midwife. They were married in Coppermine and lived there for nineteen years, raising two children before moving to serve the parish of Fort Smith for four years. In 1973, Sperry was elected Bishop of the Diocese of the Arctic, and lived first in Iqaluit and then in Yellowknife, where he spent the rest of his life.

Throughout his ministry, Sperry was committed to the people and culture of the Arctic. He became fluent in Inuinnaqtun, translated the bible, taught many to read and write, and is credited with helping to preserve Innuit language and culture during the social upheavals of the 1950s and 1960s. He supported and mentored local clergy, including Andrew Atagotaaluk, who became the Anglican Communion’s first Inuk diocesan bishop. Bishop Andrew acknowledged Sperry as his “spiritual father” crediting him with “much influence on making us sensitive to who we were as Inuit people.”

Himself a veteran of the Royal Navy in the Second World War, Sperry devoted himself to military chaplaincy in his retirement., working with the Canadian Rangers of Joint Task Force North, the Legion, and with veterans throughout the Arctic. In 2010, Bishop Sperry was a guest of honour at our Branch’s Retreat in Cornwall, ON, and spoke of his ministry at the scarfing ceremony for that year’s new class of chaplains.

A colleague of his, Tom Chesterton, remembered Sperry as “a down-to-earth, ordinary Christian; he loved the Gospel and he loved the people of the Arctic, and he loved, most of all, bringing the two together.” Sperry’s example of meeting people where they are, learning their culture, and serving them in a simple and concrete manner stands as a luminous icon to us in our own work as chaplains.