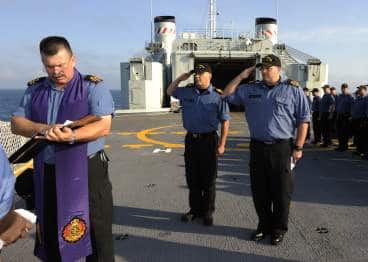 The one rite of the church that has the potential to have the greatest impact on people is the funeral liturgy.  The part that can be the most profound is the act of the committal, or the Service at the Graveside, as it used to be called.  For members of a ship’s company, this service takes on a whole new meaning and often has a lasting impact on those who witness and participate.

As with all religious services in the CF, this final act of remembrance is voluntary, but it is one of the services onboard a ship that tends to draw the biggest gathering of people.  The service is simple and elegant, with the Officer of the Day and a Bos’n piping the still, a group of sailors attending the flag draped Committal Board, and the CO or XO reading each biography.  It allows those who are there the opportunity to reflect on their own lives and those they love who have gone before them.

This service also gives the chaplain exposure to the crew in an environment that afterwards will foster the questions of life and death and the life hereafter.  As one who has been honoured with conducting such services, I find that I am struck by those who take time out of their own duties, Ordinary Seaman and Lieutenant Commanders alike, who come and with dignity and solemnity bid a final farewell to those who have served before us.  The question has been asked as to why the family of the departed is not included in this ceremony, and there are a number of very formal and legal answers to this, but I think that the whole family of these persons are involved in this last act of remembering.  The Navy family and the immediate family, as great care is taken to have this moment documented in photographs, letters and a sea chart showing the final resting place of the former CF member.

The family on shore is represented by the family at sea and it is an honour that a ship’s company does not take lightly, as often many of them would say, “That will be me, one day”.