Its name may have changed, but the organization formerly known as the Church Army in Canada retains its singular focus on evangelism while offering an ever-increasing range of practical resources for those called to ministry.

Threshold Ministries, which traces its roots to the Church Army founded by 19th century British evangelist William Carlile, adopted its new moniker in 2010 to better reflect the present cultural context, with “threshold” referring to the place of entrance into God’s kingdom.

“We’ve really been intentional to keep to what we are [and] what we have been about, which is evangelism,” national director Shawn Branch said.

“So we’re still training people who are working within parishes; we’re still trying to provide resources for individuals to do evangelism within the local context—and some of the things we’ve kind of refined what we were doing.”

One of the main refinements, he noted, is providing more practical resources for evangelism.

The organization recently received a major boost in that regard through a $6,000 grant from the Anglican Foundation of Canada for a video studio to help deliver short teachings on ministry, evangelism, outreach and mission.

With the grant helping to pay for equipment, Threshold Ministries will now be able to produce regular video clips offering tips on ministry, such as how to have conversations spreading the message of Christ. It will post the videos through social media and on websites such as YouTube and Vimeo to better reach evangelists in more remote areas.

“If someone from, say, northern Ontario was looking and saying, ‘Well, we can’t really do anything, I just live in a small community,’ hopefully what we’d be able to do is help equip them to do that,” Branch said.

Another resource Threshold Ministries is offering for those engaged in evangelical work is Stepping Into Evangelism, a newly released 64-page booklet full of practical tips and exercises for sharing the gospel. 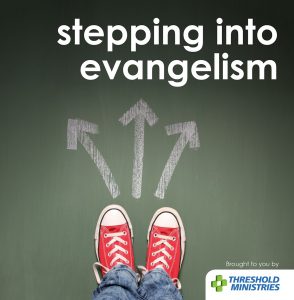 Threshold Ministries adapted the resource for a Canadian audience from a book produced by the Church Army in the United Kingdom, with Branch writing one of the chapters.

“A big part of the reason that people don’t do evangelism is because they have this image that you need to have some sort of theological training, [or that] it’s not something that the average person can do,” Branch said.

“What we try to say is [that] evangelism is something that everyone can do and should be doing,” he added. “A theological education is not going to give the magic script to do it…In the section that I wrote, I emphasize there were times even in my ministry that I have made mistakes in doing evangelism and have [learned] from that, but hopefully I’ve been able to plant seeds in someone’s life that someone else can help them…nurture.”

In its evangelical work, which often involves helping the poor and those living on the margins of society, Threshold Ministries avoids a “cookie-cutter” approach in favour of adapting its work to the unique circumstances in each area.

Branch is currently planning to hold one-on-one conversations with bishops later in the year to discuss what their needs are in each diocese and how to train evangelists to work in those specific conditions.

“My hope is that in the course of the next year…we can see some of those partnerships and those local training things come off the ground.”