On March 13, the Rev. Dr. Olav Fykse Tveit, General Secretary of the World Council of Churches (WCC), will visit General Synod offices to learn about the full communion relationship between the Anglican Church of Canada (ACC) and the Evangelical Lutheran Church in Canada (ELCIC). 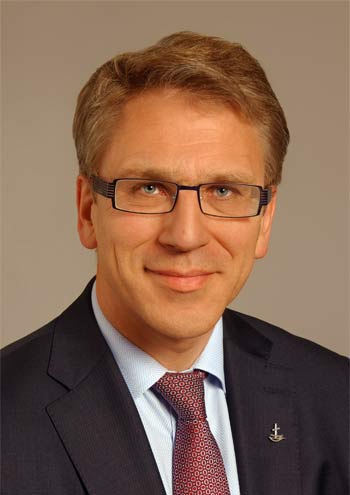 Dr. Tveit will meet with Anglican and Lutheran staff and leaders to discuss the churches’ joint mission work. He will also preach at a midday Eucharist where the presiding role will be jointly filled by Archbishop Fred Hiltz, Primate of the ACC, and ELCIC National Bishop Susan Johnson. Archbishop Hiltz and Bishop Johnson will also participate in the day’s meetings.

The Anglican-Lutheran full communion relationship was established with the 2001 Waterloo Declaration. The churches allow mutual recognition of baptisms and the interchangeability of clergy. Since then, joint mission work has flourished to the point that the churches are planning their first joint national meeting, to be held in Ottawa, July 2013.

“[Dr. Tveit’s] visit is important and of mutual value,” said the Ven. Bruce Myers, General Synod’s coordinator for ecumenical relations. “He will have the chance to become better informed about the fruits and challenges of a decade of full communion between ACC and ELCIC, and to see how the Waterloo Declaration might serve as a model for other churches in the world.”

This Toronto visit is one of many that Dr. Tveit will make to Canadian member churches. During his term, the General Secretary seeks to personally visit as many of the WCC’s 349 member churches as possible.

The ACC was a founding member of the WCC in 1948. When the ELCIC became a denomination in 1986 it also joined the WCC.

“[Dr. Tveit’s] visit will also allow the leadership of the Anglican Church of Canada and Evangelical Lutheran Church in Canada to engage with the top official of the world’s largest and broadest fellowship of churches at a decisive time in its life,” said Mr. Myers.

“Confronted by an increasingly tepid enthusiasm for ecumenism-and a commensurate shrinking of resources-the WCC is facing many of the same challenges as the mainline churches that form its membership.”

On March 14, Dr. Tveit will deliver a public evening address on “The Unity We Seek: Exploring the Hopes and Challenges of Modern Ecumenism” at St. Andrew’s Presbyterian Church in Toronto.