Home > Indigenous Ministries > A history of our work

A history of our work 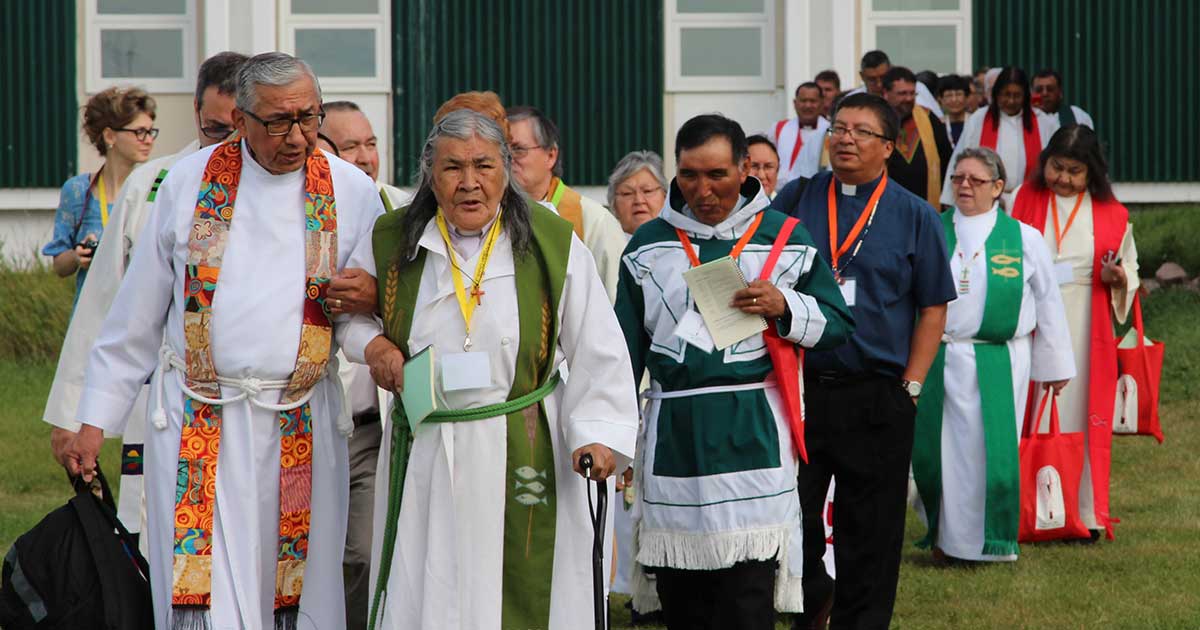 In 1969, the church ended a century of running residential schools. It also committed to a new relationship with Indigenous peoples, heeding Charles Hendry’s call (Beyond Traplines), for a partnership based on solidarity, equality and mutual respect.

Since that turning point, the church has slowly grown into its solidarity role, supporting our political struggles for self-determination, recognition of treaty and land rights, and respect for Mother Earth.

For 47 years we have had Indigenous staff at the national office. Our council has found its voice and strength, and become the Anglican Council of Indigenous Peoples.  Since 1989, fourteen Indigenous bishops have been elected; 10 First Nations, 3 Inuk and two Métis. Six are now retired; they are Charles Arthurson, Gordon Beardy, Benjamin Arreak, Andrew Atagoaaluk, Thomas Corston and Paul Idlout.

In 1994 and in 1997, we responded joyfully to God’s sacred call and covenanted together to work for self-determination within the church. That New Covenant was accepted by the Anglican General Synod.

Through three national convocations (1988, 1993, and 1997) we reclaimed our identity as Indigenous Anglicans, and began to share and heal our pain from the residential schools. In 1993 we accepted from the Primate, Archbishop Michael Peers, an apology from the church for the residential-school system. Since 2000, five national Sacred Circles have been held with focus on healing, moving toward self – determination, finding and sharing our Indigenous voice and developing a true partnership with the Anglican Church of Canada.

In a March of 2003, leaders of the Anglican Church from across Canada and Federal officials ratified an agreement that detailed the payment of compensation to victims with valid claims of sexual and physical abuse at Anglican-run residential schools.  The All – Parties Settlement Agreement came later in 2005.

Also, in August of 2005, The Sacred Circle issued the Pinawa Declaration:

Given the crisis in our communities and to insure the survival of Anglicanism in our territories, we call for the election and consecration of 15 aboriginal bishops within one year. These missionary bishops will be based in major southern cities and in the north. Each bishop is to be elected  in a region. Each bishop will be supported spiritually and monetarily by aboriginal people, sharing justly in the historic, invested wealth of The Anglican Church of Canada. These bishops will be full Anglican bishops treated as equals of non-aboriginal bishops. They are to be welcoming of aboriginal traditions, teachings, and ceremonies.

The Anglican Council of Indigenous Peoples began the search for the National Indigenous Anglican Bishop (NIAB) in 2005. After several interviews, The Rt. Rev. Mark MacDonald (Wendat) was called to be the first NIAB. He started this ministry in the spring of 2007 and was installed at the General Synod of 2007 in Winnipeg. The Elder’s of Indigenous Ministry gave him five charges:

The Rev. Barbara Andrews (Enoch Cree) was elected Bishop of the Anglican Parishes of the Central Interior, now Territory of the People, in June of 2009.

“In what was described as an ‘historic moment’, the General Synod of the Anglican Church of Canada has approved the introduction of a new canon (church law) that firmly established a self-determining national indigenous ministry within the church. The resolution to establish Canon 22 was passed at General Synod 2010 in Halifax.

In March of 2010, The Ven. Lydia Mamakwa (Oji – Cree) was elected Bishop for the area mission of Northern Ontario.

Bishop Lydia Mamakwa and Bishop Mark MacDonald worked together to establish the Spiritual Ministry of Mishamikoweesh, a new diocese in the Anglican Church of Canada. This was approved by General Synod in 2013 and Lydia was installed as the first bishop in June of 2014.

At the General Synod of 2013, Canon 22 as amended, was also passed. This Canon solidified the Office of the National Indigenous Anglican Bishop and the ministry toward Indigenous self-determination.

The 8thSacred Circle in the summer of 2015, agreed to move forward with self – determination and endorsed the idea of a Fifth province or an equivalent within the Anglican Church of Canada. Sacred Circle asked the Anglican Council of Indigenous Peoples, the Leadership Circle, and the Office of the National Indigenous Anglican Bishop to take this work forward. A Focus Group was appointed to undertake a number of tasks, including but not limited to:

In December of 2016 the Corn Soup Meeting report was issued to The Focus Group for review and discussion. This report identified several points that needed to be considered as we move forward.

In March of 2017, The Corn Soup II document was issued to The Focus Group for review and discussion. This document identified priorities for the journey and set forth a budget to fully fund three regional offices.

Both were presented to ACIP for review, discussion and acceptance.

At the General Synod of 2016, Primate Fred Hiltz called for a national consultation on Indigenous ministry self – determination. In September of 2017 the consultation, “The Road to Warm Springs” was held in Pinawa, Manitoba.

The Rev. Riscylla Walsh – Shaw (Métis) was elected bishop for the Trent – Durham district, Diocese of Toronto in 2017.

In 2017, The Ven. Sidney Black (Blackfoot) was elected bishop in the Diocese of Calgary.

In 2017, The NIAB and leadership of Northern Manitoba, inspired by the “Road to Warm Springs” consultation on self – determination, resumed discussion and planning for an area mission and election of another Indigenous Bishop.

In the summer of 2018 the 9thSacred Circle, “Making and Strengthening Disciples:  Reborn by Water and Spirit,” University of Northern British Columbia, Prince George, BC. The Statement, “An Indigenous Spiritual Movement, Becoming what God Intends us to Be” was presented.

On September 24, 2018, the Ven. Isaiah “Larry” Beardy (Cree) was ordained and consecrated as the first bishop of Northern Manitoba in the Indigenous Spiritual Movement of Mishamikoweesh.

On October 12, 2018, the Rev. Geoff Woodcroft (Métis) was ordained and consecrated as the Bishop Coadjutor for the Diocese of Rupert’s Land. He became Bishop of Rupert’s Land January 5, 2019.

The Rev. Chris Harper (Cree) was ordained and consecrated Bishop of Saskatoon on November 18, 2018.

During the Arctic Synod, March 28-31, 2019, the Rev. Annie Ittoshat (Inuk), the Rev. Lucy Nester (Inuk) and the Rev. Joey Royal (Métis) were elected and consecrated suffragan bishops for the Diocese of the Arctic.

The Anglican Council of Indigenous Peoples and other Indigenous leaders are committed to further planning and discussion to restore the Circle with the self-determination vision of the Elder’s; to become and a fully Indigenous Church within the Anglican Church of Canada and walk together in partnership.