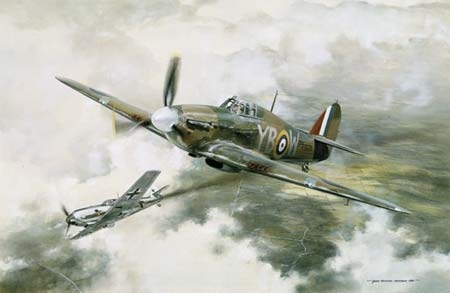 BATTLE OF BRITAIN SUNDAY commemorates a dramatic turning point in the history of the Second World War.

The German objective was to eliminate the Royal Air Force both in the air and on the ground, and to obtain air superiority in preparation for a seaborne and airborne invasion. Deployed along the French and Belgian coasts, the Luftwaffe began their first heavy onslaught early in July 1940, directed against British shipping and the Channel ports. The intention of this first phase of the battle was to draw the Royal Air Force into combat and wear down its strength. The second phase, from 8 to 18 August, consisted of intensive day operations against coastal radar stations and fighter airfields. The third phase began after a five-day lull with increased night attacks and attacks on the fighter airfields in the London area.

The daylight assault on London itself marked the beginning of the fourth phase. This opened on 7 September, with attacks on the docks which, though serious themselves, brought vital relief to the fighter airfields which had been under such pressure, and lasted most of the month. It reached a climax on 15 September, when over one thousand sorties were flown against the capital in the afternoon and at night. On that occasion the Luftwaffe lost 56 aircraft. It was, in Sir Winston Churchill’s words: “One of the decisive battles of the war.” Churchill went on to say: “The gratitude of every home in our Island, in our Empire, and indeed throughout the world… goes out to the airmen who, undaunted by odds, unwearied in their constant challenge and mortal danger, are turning the tide of world war by their prowess and by devotion. Never in the field of human conflict was so much owed by so many to so few.”

Throughout October, the fifth and last phase of the Battle saw the decline of enemy daylight attacks on London and an increase in the night bombing of Britain’s major ports and industrial centers. At the beginning of the struggle the Luftwaffe had 2,790 aircraft to launch against England. Britain had fewer than 60 fighter squadrons, – some 650 aircraft – and the ground staff had to work sometimes 16 hours a day to keep the machines in the air. Between 24 August and 6 September alone, Fighter Command lost 103 pilots and 128 seriously wounded (including Canadians), while 366 fighters had been put out of action including Canadians pilots included. There were 1495 pilots and crew killed during the Battle of Britain, of which 49 were Canadian.  Of 103 Canadian fighter pilots in battle, 23 were killed in action.

Many Canadians served in the squadrons of Spitfires and Hurricanes which repulsed the Luftwaffe in the summer of 1940. No. 1 Fighter Squadron, Royal Canadian Air Force (RCAF), equipped with modern eight-gun fighters, became the first RCAF unit to engage enemy planes in battle when it met a formation of German bombers over southern England on August 26, 1940. It shot down three of them and damaged four others with the loss of one pilot and one plane. Its next meeting with the enemy was not as fortunate as it was attacked out of the sun by Messerschmitts and lost three planes. By mid-October the squadron had accounted for 31 enemy aircraft destroyed and probably 43 more destroyed or damaged. It lost 16 Hurricanes; three pilots had been killed.

To limit confusion, the RCAF squadrons were operated as separate units from the RAF, generally keeping the Canadians together.  Other Canadians flew with the Royal Air Force during that difficult period. No 242 (Canadian) Squadron RAF, which had been formed in 1939 from some of the many Canadians who flew directly with the Royal Air Force, was not reinforced with veterans from the French campaign and joined in the battle. On August 30, nine of its planes met a hundred enemy aircraft over Essex. Attacking from above, the squadron claimed 12 victories and escaped unscathed.

In commemorating the airmen who fought in the Battle of Britain, we pay tribute also to those who in later years of the war served in all the Allied Forces at sea, land, and air. Today we record our continuing sense of gratitude for what was achieved in the darkest moments of war, and we rededicate ourselves to strive untiringly for peace, justice, and freedom in the world.

*Adapted from the service of Westminster Abbey, 2004 and other public domain sources.