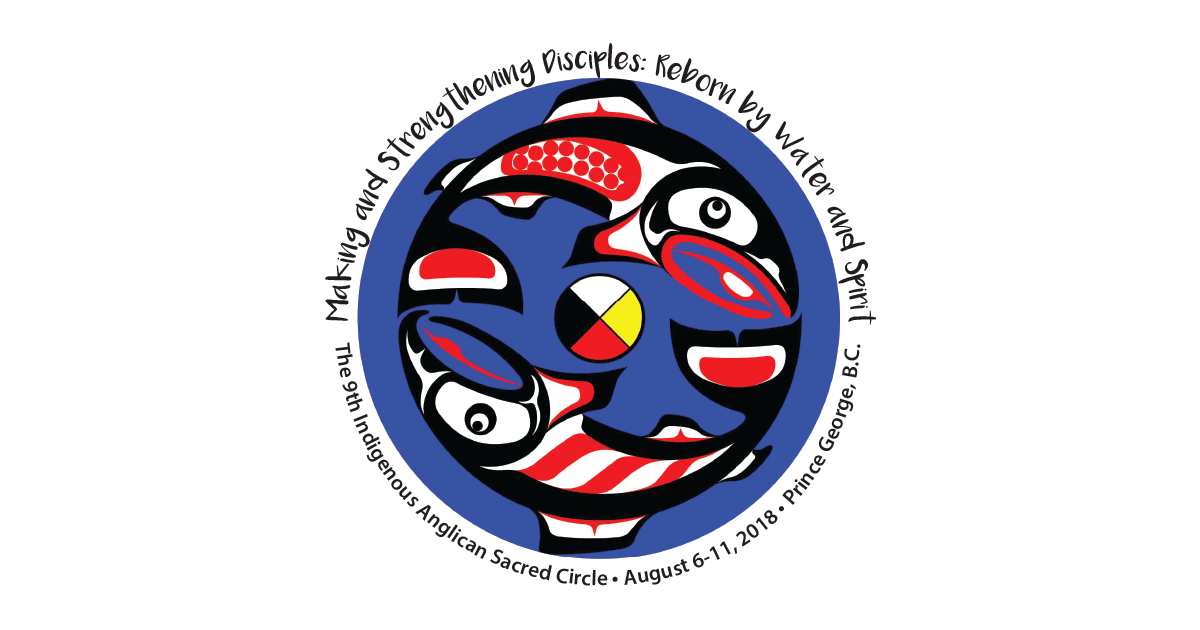 About the Logo for the 9th Sacred Circle

Many Indigenous people rely on the harvest from land and water for healthy food. Salmon is very important to many coastal First Nations and those who live along waterways where salmon spawn. When I lived on the Yukon River in Alaska I came to understand the importance of salmon. I once watched an elder cut a salmon for eating and preservation. Every cut made was with prayer and precision; I saw her lips move as she whispered prayers of thanksgiving. When all of the eating parts were removed there remained a bucket of what could not be eaten. She asked me to dump the bucket into the river, to pray as I did to return the spirit of the salmon to the river. There is nothing better than fresh cut Yukon King Salmon cooked over a fire on the bank of the Yukon River!

Our 9th Sacred Circle logo shows two salmon, a female and a male. Blue represents water. The female is about to give birth, signifying our rebirth by water and the spirit as an Indigenous Church. The salmon swim in a circle, a sacred Circle that represents discipleship and the strength we find in the Circle to be good disciples. Salmon swim many, many kilometres to lay eggs so their life can go on. And, so it must be for us. The Medicine Wheel shows the four colours of the directions from which disciples come and the four main peoples who live upon Mother Earth; Asian, Indigenous, Black and Caucasian. It symbolizes the need for us to live upon Mother Earth in peace and partnership.

Pauline Michele Bull is married to Eric Parnell Jr who is a Haida native, band member of Masset, BC, Haida Gwaii nation, when they married Pauline was adopted into the “Raven” clan. Pauline’s father Sandy is Interior Salish native, and is a band member of Seton Lake, BC, also known as “Lh7us”, which means, “Coming to Head of the Lake” in St’át’emc native language.  Seton Lake, BC, is part of St’át’imc nation also known as “Lillooet” nation, her father’s clan is, “Crane”.  Pauline’s mother Lorna is native from Nickeyeah, which is located across the river from Lytton, BC, the meaning of “Lytton” is “Kumsheen”, which is part of Nlaka’pamux nation, which means, “People of the River”.

Pauline was born on September 21, 1964, and has lived in Vancouver, BC, all of her life.  Pauline was introduced to the art by her aunt Marylou who taught her to bead in the mid 80’s. Pauline’s painting career started in 2009 with encouragement by Eric Parnell, Haida Gwaii artist, and has been collaborating with Eric since then. Pauline’s own style is a combination of realistic and traditional.  Pauline has been designing and painting her own art work since 2010.  Pauline considers the art to be very spiritual and healing. One of her goals as an emerging artist is to be a small part of reviving our native culture.

Please do not copy or reproduce the logo in any form. We need to respect the artist.