Home > Anglican Military Ordinariate > A Look Inside > Ministry Among Recruits 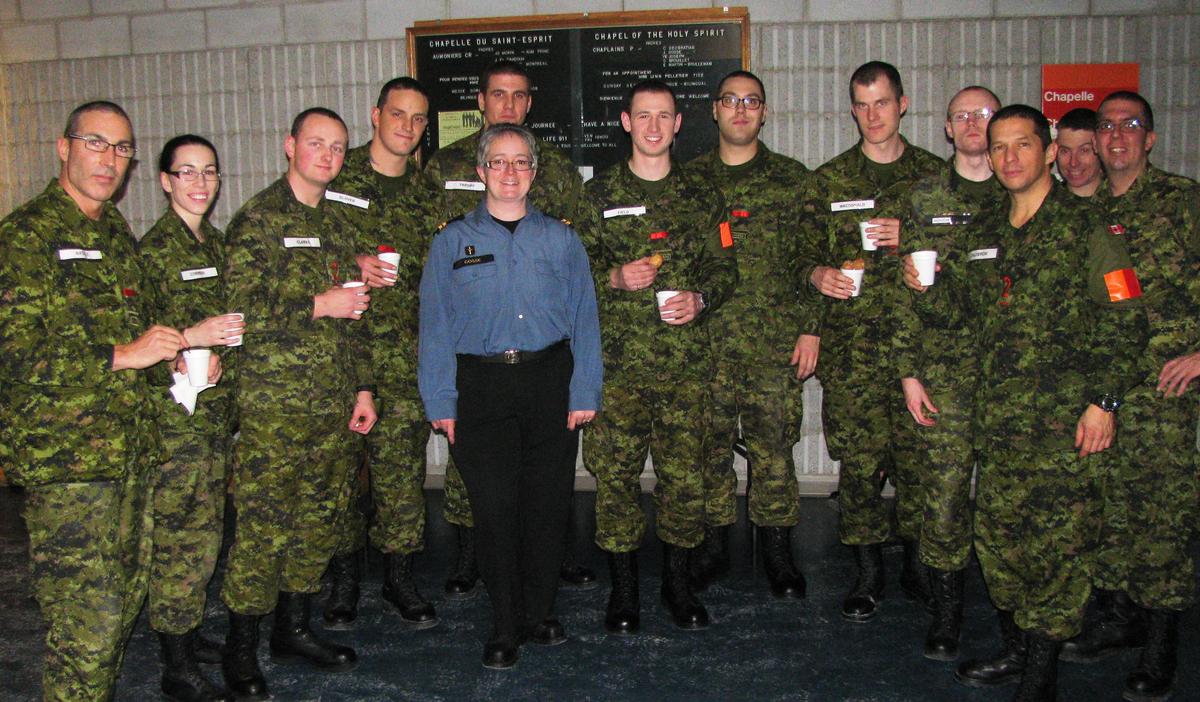 Ministry Among Recruits
by LCdr the Rev’d Jennifer Gosse

The Canadian Armed Forces trains all its new personnel at the Canadian Forces Leadership and Recruit School (CFLRS) in St-Jean, QC.  There are few places where a chaplain is more appreciated than in that context and that makes CFLRS a phenomenal place to do ministry.  The vast majority of the people who pass through that institution are 18 – 25 years old.  Many of them have left home for the first time.  Some of those who are little older have left spouses and children on the other side of the country in order to enter this new way of life.  Few of them have any experience of military life prior to arriving and almost all of them experience culture shock as never before from the moment they step inside the building.

The purpose of basic training is to take civilians and, in 14 or 15 weeks, turn them into soldiers.  The transformation these men and women undergo in that short time period is a wonder to behold.  As a chaplain walking through the halls when a new platoon arrived, I would feel so sorry for them as I often saw panic and confusion in many of their eyes.  I knew they were wondering to themselves, “What have I gotten myself into?”  They were so awkward in their new uniforms.  They would try their best to keep in step as their staff marched them from place to place.  Haltingly they would try to salute me as all they saw was an officer passing by.  I always wanted to just stop and say, “Relax, I’m a chaplain, I’m here to support you not judge or criticize you,” but such conversations in the hallways are not encouraged, and so I would have to wait until I would get them for their first “Padre’s Hour”.  That’s when I could finally explain to them who I was and that I was probably the only friendly face they would see for quite some time.

I would invite them to the Chapel on Sundays, and many of them would come!  To be honest, I never knew whether they were there because they appreciated the worship, or simply because it was the only place they were allowed to go.  You see recruits are “confined to barracks” for their first six weeks, which means they are not allowed to even leave the building in which they are housed, fed and taught, much less escape from the base itself.  The chapel is really the only place they are allowed to go during that time.  For that reason, the chaplains also host an event every Friday night at the chapel, and the Commandant of CFLRS has ordered that every recruit must be allowed to attend if he or she wishes.  The event is called Life 911, it is inter-faith, open to all, and it gives the chaplains the opportunity to socialize with the recruits and let them have some time to decompress after an intense week of training.  They appreciate the chaplains so much for giving them that opportunity, that it is not strange on a Friday night for a chaplain to find him or herself in the company of 300 or more recruits who just want to relax and be off duty for three short hours.  Can you imagine any church having a Friday night youth group with 300 participants?  The chaplains in St-Jean can.

Finally, after following my new recruits through the many trials they faced: obstacle courses, rappel towers, field training, and weighted ruck marches, they would arrive at the end of their training.  Graduation Day was always the proudest day of my ministry in St-Jean.  To see those same faces, no longer scared and confused, but now confident and proud in their dress uniforms, parading in front of the school’s Commandant, their training staff, and the family and friends who were able to come to support them.  Every time one of my platoons graduated, I felt like a proud parent watching my children all grown up, and at every parade I fought back the tears as I stood witness to their transformation.  I praise God because at every graduation parade the chaplain is given the privilege of leading a prayer for the graduates.  It gives the chaplain the opportunity to thank God for supporting them through such a tremendous journey, and to commit them into God’s gracious protection as they leave the school to take up their new military careers.