The crest of the Anglican Church of Canada is very similar in design to the flag of General Synod.  The flag consists of the red cross of St. George, on a white background, with four green maple leaves in the quarters.

The red cross on a white background is the symbol of St. George, patron saint of England.  The cross of St. George is widely associated with the Church of England, the mother church of the Anglican Church of Canada.  The four maple leaves symbolize the four ecclesiastical provinces.  They are green to indicate “a youthful and vigorous church and nation”. 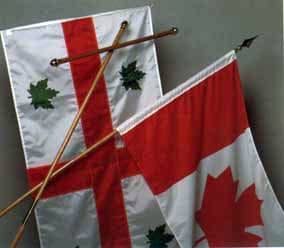 A flag for the national Anglican Church was first requested in a letter from the Diocese of Montreal, to the Executive Council of the General Synod, in November 1953.  The Council approved the recommendation and a small sub-committee was formed and reported to the 1955 General Synod.  The original design proposed by the sub-committee (the red cross of St. George on a white field with a gold maple leaf superimposed in the middle of the cross) was slightly modified by the 1995 General Synod.