Hymn Books of the Anglican Church of Canada

The Anglican Church of Canada has had four hymn books in the twentieth century, three of the four with title “The Book of Common Praise” or simply “Common Praise”.  As the Preface to the 1938 edition noted “The average life of a hymnal appears to be twenty-five years.  Each generation, with its problems and outlook, must ever seek new ways of expressing its ideals and aspirations.  Taste in literature and music changes”.

An extended history of the hymn books of the Anglican Church of Canada has yet to be written but a very helpful short history, with special emphasis on the 1998 edition (Common Praise) can be found in the article:  “Why we publish hymn books: theology for the people” by the Rev. Paul Gibson, in the Spring 1999 issue of Ministry Matters.

In 1909 “The Book of Common Praise being The Hymn Book of The Church of England in Canada” was published.  It was “Compiled by a Committee of The General Synod”.  The hymnal was published in Toronto by Henry Frowde and was printed in Oxford, England at the University Press.

It contained 795 hymns as well as a “Chant Appendix” with 139 settings for “The Responses”, “Nunc Dimittis”, “Sanctus”, etc.  The Music was edited by Sir George C. Martin, Organist of St. Paul’s Cathedral, London, England.

In 1938 “The Book of Common Praise (Revised) being The Hymn Book of The Church of England in Canada” was published.  It had been “Compiled by a Committee of The General Synod”.  The hymnal was published by the Anglican Book Centre in Toronto and printed in Great Britain by the Oxford University Press. 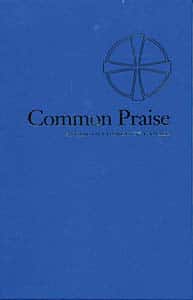 Common Praise (1998) is the last of a series of hymn books compiled and published by the Anglican Church of Canada.  The current text, published in a blue binding, contains 769 hymns and pieces of service music.