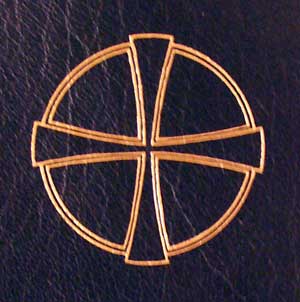 The Cross which has appeared on all Anglican Church of Canada liturgical publications since 1985 can be described as a cross set in a mandala.  (The mandala is the quadrated circle which stands for wholeness, unity and integration.)  The mandala often occurs in Christian art with Christ in the centre.  The mandala may also be seen as the ring of eternity which traditionally appears behind the celtic cross.  It is important to note that the cross of Christ extends beyond the circle, going beyond all borders and boundaries.

The design of the cross was suggested by the Rev. Paul Gibson (then Liturgical Officer for the Anglican Church of Canada), drawn by graphic designer Saskia Rowley and since copyrighted by the Anglican Book Centre.

In an explanatory e-mail written by the Rev. Paul Gibson, Paul commented on the design and said:  “It seemed to me that the model of salvation most appropriate for the time was, “the bringing together of the broken pieces.”  The mandala often appears in Christian art with Christ in its centre. I suppose the mandala is not far from “shalom” as the Greek equivalent of that word is used, for instance, in Colossians 1.20, `through him God was pleased to reconcile to himself all things, whether on earth or in heaven, by making peace through the blood of his cross,’ or in Ephesians 2.14, `For he is our peace; in his flesh he has made both groups into one and has broken down the dividing wall.’